Our kids are proof that it is about educating only about the male/man & female/woman binary, and intersex erasure, that messes up the truth around natural bodily variations existing in us humans.  You see, our children were taught that intersex bodies and transgender bodies existed.  We educated them as soon as I realized I was not a disorder and was actually born intersex instead.  Yup, they were taught about how a woman can have a penis and a man can have a vagina.  A person can have genitals that in-between too, and it is ok.  Nature creates all sorts of ways a human body can exist.  They were also taught that sometimes a woman can be XY, a man can be XX, and those other chromosomal variations of human exist too, like XXY, XX/XY, XO and so many others.  Here is the United Nations’ Intersex Fact Sheet, if you have never heard of intersex before. 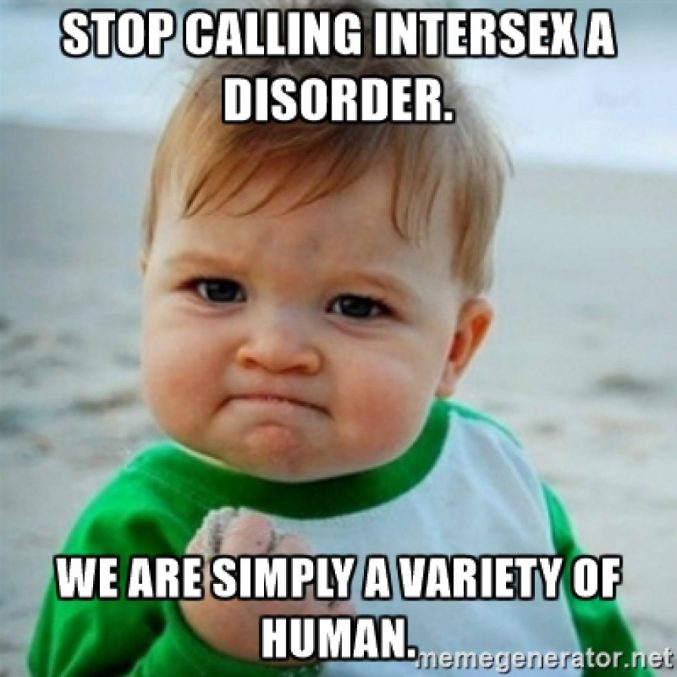 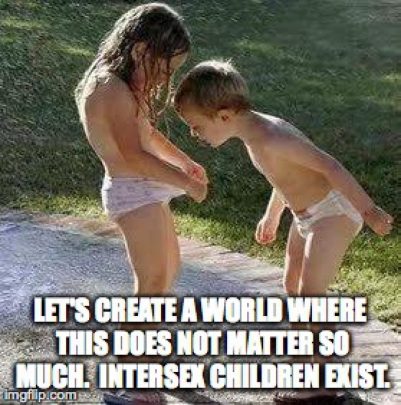 You see, naturally, humans come with many variations of genitals, reproductive systems, chromosomes, and hormones.  It simply is the way nature planned it all.  We are a variety of human.  It is that simple. 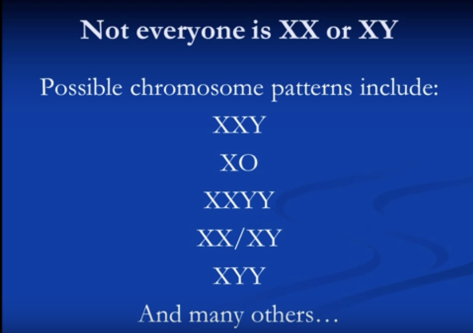 Our kids had to actually learn that the male/female binary is what the rest of the world believes.  After learning about intersex, it blew their minds that there were just two options:  Male or Female bodies.

Now, imagine teaching your children that you have been erased by this world.

That there is no box for me, few doctors that will see me even because I am taboo.  It truly sucked for them, my husband and for me.  They felt violated themselves and angry and scared for me!  We lost our home trying to chase down a doctor, across the country that would treat me. Yes, I was medically abandoned by doctors and told I was no longer patient compliant when I refused to do what they asked me to appear female.

It is hard to explain to a child that there is NO box for their type of father.   That it is the world that messed up.  That it was not my body and not my hormones that went wrong.

That is why when people asked: “how are your kids taking it?” when I emancipated my gender, we shared that they were HAPPIER!  In the typical male/female binary world, it is devastating though.  But most assumed otherwise and thought:  “OMG! How horrible that those poor kids just lost their mother!”   Typical people also immediately assumed I would be having genital conforming surgeries too when I do not.   We can just imagine the gossip. We lost countless friends, who could not cope with it.

Everyone also assumed my husband, of twenty-eight years, would leave.  I was so disabled and sick, that he too gained his sex partner back.  I was asexual for over a decade, due to doctors giving me no choices.  We had become roommates.  So when people asked:  “How is he taking it?”, it was an insult to me!  Yes, things changed socially changed dramatically for our family,  but it was not the end of the world.  It was the beginning of a new healthier life as a couple!  We also would not appear to the world as a gay couple!

To see more pictures of my husband and me together, please go to: I was born perfect, and I am lovable. Thank you, United Nations.

To an intersex person, like me, and some of my intersex friends, like Tiger Devore, gender is all a “gender performance”.  A phrase that Tiger likes to use, and created to explain what I am saying here today.  So, my kids did not lose a thing. They gained a healthier parent who now had a different gender performance for the world!   I became “Vader” to them, another word for father.

I did not die when I faced certain death if I had continued on appearing female.  It is the male/female binary world that thinks things are so rigid and so concrete that the sky falls when one changes that performance.  And this is sadly why we lost so many friends and family.

Some think me to be a mythical hermaphrodite too.  Thanks to how this world brainwashed me too, all my life, I don’t feel magical, I feel like a guy with a ‘mangina’.  A word that the famous transsexual, Buck Angel, says to describe his amazing male body.  I feel like a gestational father too, words my intersex friend,  Cary G. Costello, uses to explain away us guys who can grow a baby within our wombs.  I am a “womb-man”, I was never a woman.   I am a “seahorse dad”.  For it is the seahorse father that gives birth.   Our kids call my husband “Dad” and I am called “Vader” by them.  Vader is a word like ‘father’.  Here I write about the Difference Between Hermaphrodite and Intersex.

Added after this blog was published: Buck Angel talks about accepting his “mangina”/vagina here: How Learning to Love My Vagina Affirmed My Manhood By Buck Angel, March 20th, 2018.

So world, can you make room for the female penis too?

With us intersex people it exists  Yup, my urologist calls it a penis now that my gender has changed to male!  So that means, for forty-six years, before I appeared a male to this world I had a “female penis”.   I am the same person, yet when I appeared female they denied calling it that.   You can read this blog about the intersex ‘penis’ and all the shapes and sizes they come in:  Eight Names for the SAME thing: Penis, Phallus, Clitoris, Phalloclitoris, Micropenis, Microphallus, Clitoromegaly, and Pseudo Penis

I know many intersex girls who have a penis, and this world should not threaten cutting it off either.  Due to intersex erasure, eugenics (surgically taking away an intersex person’s fertility with non-consensual childhood surgery), and genocide (aborting us when detected before birth), most female penis’s or large clitoris get removed.  I know many transgender girls too who have a female penis.  They should not feel they have to lose theirs too, to be validated as real women.  It sickens me that transgender children are taught to believe that they are in the wrong bodies, but that is another blog.

For us intersex people, Genital integrity is all we want. Our life as our ‘true selves’ is all we want.  We simply just want the right to be LOVED the way we were born:  INTERSEX!    We simply want the human right to sexually experience OUR INTERSEX GENITALS, uncut and unharmed too.

The United Nations stands with us Intersex People now.

The United Nations declares that intersex erasure and the torture of non-consensual childhood surgeries stop!  Coerced genital surgeries and sterilizations in Transgender and Intersex Adults need to stop too!

It is time to allow the female penis and the male vagina and without shame. No Body Is Shameful!

How to get help:  World Wide Advocacy and Support for INTERSEX and TRANSGENDER People 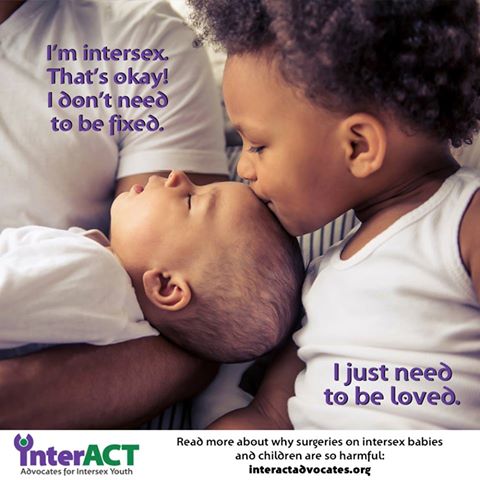 A meme from InterACT, that I want to give more notice to, so include it in this blog.

Thank you for visiting my blog today! 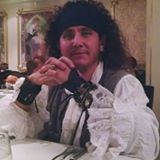 Together we change this world, one message at a time.

8 thoughts on “A Woman’s PENIS and A Man’s VAGINA; and explaining this to our children.”

A orange ribbon stands for leukemia. James fights for his life the next several months. Please support him and our family.
Long wait at hospital. All for love. #loveislove🌈
Our beloved dog, Moose, beating the odds; enjoying his daily walk.
We walk daily in the forest. #ourintersexlovestory #dogsrule #loveislove🌈
#endosex #Intersex #Humandiversity #judaism #history #humanrights #binarymyth #wearereal #ancient
James has to win his battle with #leukemia. All the power to his #stemcelltransplant, that is coming up soon. May his life be saved! #pride🌈 #lovenothate❤️ #ourintersexlovestory

A Day to Honor and Remember those who came before us.November 8, 2021
8 months to go.