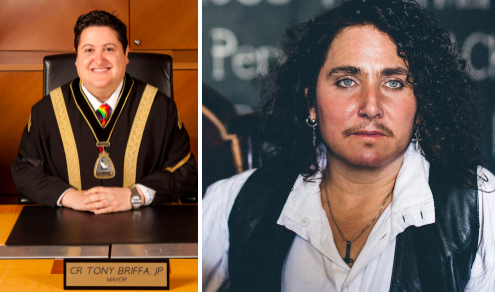 Whatever you call it, it felt like a miracle.

I was finally coming to terms with who I was as a human being.  This was after having a lifetime of not feeling real, and being thrown away by many doctors, therapist and psychiatrists, who had tried to ‘fix me’.

I was an Intersex human being.  Not male, not female, something in between.

The fact is, back in the late 60’s, when I was born I was assigned a girl.  My mother had once shared she wanted a little boy named Anthony, but instead, she would have to turn that name into:

My nickname as a teen ‘girl’ would later become

Little did anyone know, somewhere around the world in Australia, another miracle was born intersex.  They too were named a girl’s name and assigned female and that name was:

And their nickname would later become

And here we were, meeting on Facebook for the first time, March 2015, and have become dear friends ever since!  Wow!

Here is that story: It was October 2014, when I finally decided I would never do the things to conform to a typical woman ever again.  I had gotten very sick and disabled.  Doctors did not know how to help me, and most had given up on me and  I had gotten used to being patient abandoned for not wanting to endure their medical regimen. I quickly became sexually taboo.

I did not want to lose my beauty.  I always felt like an androgynous person.  I emerge from a wheelchair, and a cane.  Disability had become my reality.  I was sleeping in my house, up to sixteen hours a day in a hospital bed, because I could not even lay down flat anymore.  I felt I might die.  I received my disability from my country even.  I wished for death, that is for sure, and everyone who knew me back then knew how sick I had become.

I then figured out I could get better eating a special diet and by changing my hormones and by honoring my own truth. Soon after that, I started to search other people born intersex like me.  There they were, the two articles about Tony Briffa, from Australia.

At first glance, I did not see the coincidence at first.

I read, and there it was their birth name:

When Tony Briffa was seven years old doctors in Australia made a choice that was never theirs to make – castration.
Tony was born with healthy testes, as well as a vagina, and doctors decided it made more sense for Tony to live life as a woman – called Antoinette.
But Tony – who was born intersex – never felt comfortable being a woman, or a man for that matter.
“Nature – many would say God – made me a healthy hermaphrodite… I tried my best to be a woman but I couldn’t keep up the lie forever. Something was going to give.
“At 30 I rejected what the doctors had done to me and started living life as a man. I was open about my past, about the way I was born, and what doctors had done to me. Now, at the age of 44, I am comfortable explaining I am both a man and a woman,” Tony tells Times of Malta.

Taken from: ‘Healthy Hermaphrodite’ is both man and woman

And another one about Tony Briffa

At birth, Tony Briffa’s doctors couldn’t determine his gender. He had a rare intersex condition known as Incomplete Testicular Feminisation that made his gonads release estrogen even though he genetically tested as male. So on his doctor’s advice his parents raised him as a girl named Antoinette—they painted his room pink, gave him dolls at Christmas and made him wear frilly dresses to school.

The frequent hospital visits for hormone therapy and surgery made him feel like a freak: his parents had him castrated at age seven and even though he told his doctors as a pre-teen that he felt like a boy, they ignored him and continued administering female hormone therapy, something that filled him with desperation and thoughts of suicide as he entered his teenage years.

That day I wrote Tony.  I was confused back then after being guided by misinformed doctors and psychiatrist.  My first notes to them no doubt reflected such confusion.  To my doctors here, I remain a disorder, a syndrome, and a medical condition.  They were even trying to convince me I was transgender.   The medical system in the USA can be very confused about intersex and gender.

I knew one thing, without permission from those who had been surgically violated, I was not going to use the word “intersex” or “hermaphrodite”.   My heart was secretly broken by what has happened to their bodies surgically, without consent as a child.   I did not want to offend anyone.  I had been violated, but it had been mostly by psychiatry.  My physical body remains whole, what would they say?

So, with much bravery, I also reached out to six amazing people born intersex: Tony Briffa, along with Tiger Devore, Ph.D.,  Cary Costello, Hida Viloria, Gavan H. Coleman, and Pidgeon Pagonis.  Six of the most tolerant and loving people I have ever met on this Earth.  Around that same time, my path would also cross with Judi Herring, M.D., who had created the TEDx months before meeting me: Gender Bound, Lessons from the World Between.   This too will always feel like a God-incidence and serendipity!  Judi and I have been working together ever since September 2015.  Together we have done public talks, speaking to schools, visiting the city council, and have even spoken to the human rights commissioner here in our city.  We have become very dear and close friends.

Wow, with the opinion of all of them,  I  learned that I was not born a “freak”,  a “disorder”, “syndrome”,  or “condition”, and I surely was not “mentally derange”!  With that permission, and blessing form all of them, and with Judi Herring, M.D. standing by my side,  I became empowered!  I decided to tell the world I too was born intersex, and share my intersex story.  It has been a huge honor to add my message to theirs in ending tragedy from happening to one more innocent child.

One thing that is most amazing, is that we both have two big things in common.   First, we both find it very special that we were all born BOTH  male and female, and most of all we like to celebrate it.   We are both gender nonconforming too but in different ways!   To me, that is serendipity at it’s best!

The second thing we have in common, is we all have overcome so much trauma, due not conforming to the male and female binary.  With that experience and pain, each of us has taken all that ugliness, and all our bad experiences,  and now help the world with it.

So there you have it!

Planet Earth is an amazingly small place when you start to think about it!

Thank you for visiting my intersex story!

You can read here:  Why did I name myself Anunnaki Ray.

Please also visit the UNITED NATIONS’ INTERSEX FACT SHEET, to learn more about intersex violations and what you personally can do to help us end it.

UNITED WE WILL CHANGE THIS WORLD!

EndNote:  An intersex person can have any gender identity, and any sexual orientation.   Also, our biological sex does not equal our gender.  I believe that the Self-determination of Gender is our Human Right and that our sexuality should not be decided for us as children,  our parents, by medical, psychological experts, or the government.

9 thoughts on “The two of us, born intersex and named ‘Antoinette’ at our birth.”