Dear Senator(s) and whom it will concern,

I was born in 1967, with a rare form of Congenital Adrenal Hyperplasia and with non-life-threatening genitals that made my mom feel that I might be her son. She was going to name me Anthony Ray. Closer inspection made them decide to name me Antoinette Rae, so I was raised a girl. You see, I am 46XX, which most assume creates a female. A Catholic priest would tell them to leave my intersex genitals alone. So I am uncut since many priests are against sex reassigning surgeries. My phallus (enlarged clitoris) was so “small,” and my prostate not discovered yet, they felt I would be okay. Plus, back then, sex reassigning surgeries and intersex genital “corrective” surgeries had not evolved like it has today.

I would be sent to therapy by the age of three and four when I started to evolve into being their son naturally. Since “experts” declared me a girl, I was soon diagnosed as “perceptually handicap” and had “reversal problems.” Almost two years of treatment, backed by John Money, would begin, and I was taught, in therapy, that I was a girl when I was not. For forty-six years, I would live with a “disorder of sex development” as a boy/man, living as the woman the medical and psychiatric complex was forcing me to be. All because I did not receive informed consent.

Finally, by 2014, after many close calls with death due to iatrogenic harm, disabled in a wheelchair, I figured out I could exist. I would be forty-six years old when I learned that trans men existed. I learned that everything they teach most of us about my gender identity and genitals was wrong. That with my intersex genitals I was born with, I could be the boy I knew I always was, from the start, and I now could have the human right to become a man. I have been with my husband for thirty years now, and we have had two successful pregnancies (out of six), and we adopted our youngest. I now consider myself a gestational father or “Seahorse Dad” and a gay nonconforming intersex man.

By September 17, 2018, I would prove to The Board of Ethics to a Catholic Hospital, Florida Court, and my birth State Colorado, that my sex was intersex and my gender identity man. I would receive the first intersex birth certificate in Colorado, turning my diagnosis Q56.0 Hermaphroditism into my legally honored sex, and the governor would sign it. From there, Jacksonville TEDx supported me with my first talk: “Born intersex: we are human!, found on youtube,” and my family and I are in the documentary “Stories of Intersex and Faith.” My blog is now read by many globally, with my message of self-determination being honored by many parents.

That message is that children born with CAH and other intersex variations receive the human right to bodily autonomy and the right to live their authentic gender identity after birth, regardless of what genitals or sex chromosomes they were born. I also now speak for many 46XX CAH men and nonbinary people who survived genital corrective surgeries that had their phallus removed, surgically hidden, or reduced in size. Like Brian Douglas of the documentary Gender Revolution, and many more. Even Rosie, who has CAH too, in the book “Raising Rosie,” has come out as their son, Wade. I hope those who read this stop to listen to us boys and men with CAH genitals. We exist yet; the leading CAH organizations deny our existence as boys/men or nonbinary gender. I do believe that this erasure is due to transphobia and homophobia.

People like us, born with natural traits like a large clitoris or small phallus, deserve to make our own decisions about elective genital surgeries, regardless of what terminology their families use and what diagnosis caused their genital differences. Surgeries commonly performed on CAH infants, such as clitoroplasty and vaginoplasty, are major life decisions. When performed on infants with other diagnoses, such as Partial Androgen Insensitivity Syndrome and Hypospadias, these elective surgeries have been condemned as human rights violations by over forty international and national human rights agencies.

While there may be some CAH patients who are satisfied with having received an early clitoral reduction or vaginoplasty (I have personally not met one yet), there are plenty of intersex survivors who feel robbed of a critical decision and feel violated because they will never know what their natural intersex bodies felt like and might not even be able to orgasm after surgeries. InterACT believes that dissatisfaction rates for procedures—including clitoroplasty and vaginoplasty—can be as high as nearly half of all patients. These surgeries are incredibly invasive, and many vaginoplasties and hypospadias repairs require follow-up surgeries to reduce scar tissue when the initial surgery was not medically necessary in the first place.

It is time to stop harming innocent intersex children and let them decide if they need surgery or not at the age of informed consent. Please do not allow the voices of those who were satisfied with surgeries to overshadow the human rights violations endured by those of us who are not satisfied or, even worse, assigned the wrong gender at birth like so many of us. Please honor individual consent for all CAH patients and end the homophobia and transphobia that I believe is behind all these surgeries.  It is society that needs to be fixed, not us. We need to end this cultural dysphoria.

Below is a copy of my one emailed question for InterACT’s Panel Zoom Discussion Febuary 12th, 2021:

I thank you for taking my question to the panel.

My main concern and question:    If a child goes against their birth assignment as a transgender child, they have to wait for the age of consent, which is 15 to 18 years old, depending on the state, to do irreversible changes to their body with surgery.   This giving the child time to mature and realize if these permanent changes are truly necessary.

How can a child that is only six years old know any of this, especially if the child is being persuaded by parents or a medical system that only gives two choices to exist, endosex male or endosex female?  The Interface Project tried to give the message “no body is shameful.”  How would this bill, the way it is written promote this, if surgeries can start at six years old to conform to binary notions?  Shouldn’t the bill state that it is okay for a child to be at peace with their intersex genitals and still be granted the human right to exist as a boy, girl, both, or neither; whichever the child comes out as?

As you know, I live as an intersex man.  Naked, I appear intersex.  Clothed and everyday appearance, I appear a man and am a man.  I am okay with no genital corrective surgeries.   Not all of us will want surgeries or need to match binary endosex notions.  I hope all intersex children realize they have choices beyond the binary.

A letter from a survivor of IGM: Emory Hufbauer 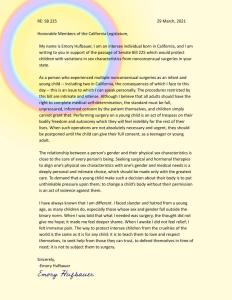