Nature created diversity and variety.  Nature did not create the male, female binary.  Nature’s variations create our genitals, reproductive systems, chromosomes and hormones.   Not everyone is sexually born typical, and “typical” is not “normal”.  There are just more typical people in this world, and  needless to say typical people made the rules about “normalcy”.  Nevertheless, often labeling anyone’s body that goes against this ‘male/female binary’,  as a “defect”, a “disorder” or a “syndrome.”  The truth is, Intersex is as common as redheads, and cystic fibrosis.   Intersex people have been around forever, and many of us do not feel like a mistake.   What is Intersex?  Here is a fast  3 minute video? “What It’s Like to be Intersex”

I will give five reasons for why I do not believe in the male/female binary system.  At the end, I reference a list of many educational videos, articles, and stories, that back up what you have learned here today.   I have made this easy, fast,  and simple, but also encourage  you to explore the messages, and videos of others.  It is greatly appreciated, by all of us in the intersex community.  Let our voices be heard.

Please share what you learn here today, and help make this a better world for us.

Here is the true picture.

XX, and XY are NOT the only Sex Chromosomes a human can have.   XX does not always mean female, and XY does not always mean male.  Variations happen all the time with all sorts of people.  People are born all the time with a variety of chromosomal variations:  XXY, XO, XXYY, XX/XY, XYY, and many others.  Needless to say,  in-utero testing, when these chromosomal intersex conditions are discovered, can justify terminating the pregnancy, and killing the fetus.  When we would have been born healthy if left to be born.

There is no male or Female Brain

There is NO scientific proof yet of a male or female brain.  However, MRI imaging is proving that the brain does PROVE that there is NO specific gender, male or female.    This means that Self Determination, of our own gender, is a must, for any of us humans.   Simply due to also now knowing that genitals, reproductive systems, chromosomes, and hormones do not create our gender.

Genitals and Reproductive Parts do not tell us anything about a person’s Gender either.

As a fetus, most of us have a genital tubercle that develops into a “phalloclitoris”.    Its name depends mostly on the size, function, gender, and if it can penetrate, or pee from the tip or not.  If it is big enough to penetrate, it is often called a penis.  Yet,  some penises do not pee from the top at all, and this is called hypospadias. 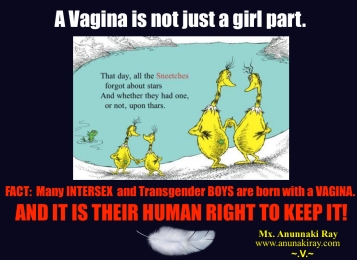 The above pictures of the developing genital tubercle, truly would not determine the gender of these two fetuses.  These two pictures, I borrowed, assumed the gender, due to chromosomal testing.  Which you now know can make an error.  Nevertheless, in the first several weeks of gestation, this is how all of us look below, regardless of our gender.

Hormones do not tell a person’s gender either.  Hormonal variations in humans are vast and varied.  To say variations are “abnormal” is not based on science, but the opinion of a social construct.

Typical hormone levels for a typical male or female, are just that: “typical”.  Typical will never mean normal.  They just occur more often.  Some hormonally variant people do not want treatment.  The bearded women are just one example of many.

Intersex people are born with many variations of their sex hormones.  Congenital Adrenal Hyperplasia (CAH),  Androgen Insensitivity Syndrome (AIS), and Polycystic Ovarian Syndrome (PCOS) are just three examples of this (there are many others).  It is our culture and the medical community that has labeled these conditions a “syndrome”.

Not all people with these conditions feel broken or want to be ‘hormonally adjusted’, or fixed.  In many cases, intersex and transgender people discover that going against what is “normal” makes us much healthier and happier.  Here is my story about that: My Body is Not Abnormal. Please Don’t Call Me Broken.

Gender is like our Personality.  There is no Scientific Test to Prove a Person’s Gender.

There is no ‘fail proof medical test’ to determine a baby’s gender.  They can only make an educated guess based on the idea of what makes a typical female, and a typical male.  If a person is born intersex, and in-between, sad to say too many times “experts” are wrong in determining the gender.  Worse, cosmetic surgery, to assign gender, can obviously result in disaster, because surgery is permanent.   This fourteen-minute video, by Judi Herring, M.D,  is helpful in understanding gender and intersex:  TEDx Gender Bound, Lessons From the World Between.

In closing, nature created a variety of different people out here.  Now you can see that the male/female binary is truly a social construct and a myth.   I think it is time to educate society, allow people to just be, to allow everyone the right to self-determine their own gender and end all the suffering.

A Penis and a Vagina does not Create our Gender Identity 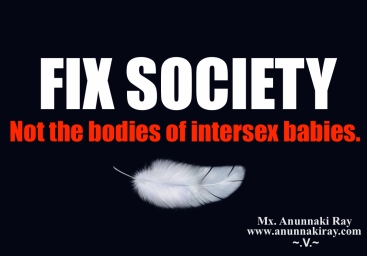 Hope for a Better World.

2 thoughts on “Five ways I show that the Male/Female Binary is a Myth, and a Social Construct. Nature has always Created Sexual Variety and Diversity.”