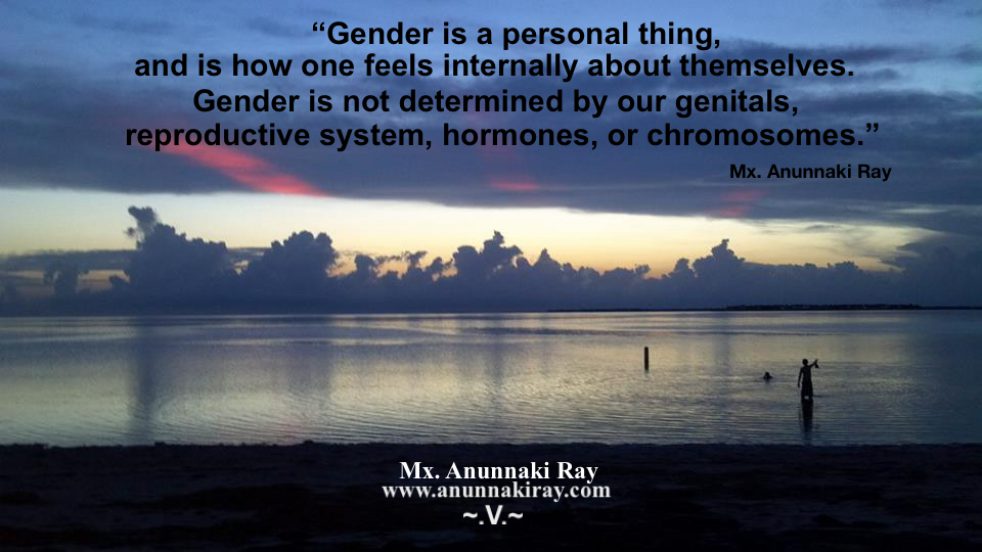 I believe that the Self-Determination of Gender is a human right for all humans.  Gender to me, is like our personality.  It has nothing to do with our genitals, reproductive systems, chromosomes or hormones.  Therefore a woman can have a female penis, and a man can have a man’s vagina.  I also believe that if a person has no genitals, they can identify as any gender, or even have the right to have no gender.

I believe that all humans are born in the right body.  I do not like “born in the wrong body” theories.  It should be up to that individual to declare they feel dysphoric about their body, without society telling them they were born wrong. Gender experts giving out the diagnosis of “Gender Dysphoria” to everyone whose genitals do not fit the expectations of typical male or typical female can be very destructive.  I actually feel it is “cultural dysphoria”, and not “gender dysphoria”.

I believe that scientifically the brain can’t accurately be proven to be either male, or female.   Therefore,  also demonstrating that the Self-Determination of gender should be a human right for all humans.  Most science around the “female or male brain” is very bias, and based a social construct of what creates a girl or boy, man or woman.

I believe that no child or infant should be forced non-consensual genital corrective surgery or surgery without informed consent.   Our gender does not reside in the appearance of our genitals and changing our genitals doesn’t magically fix things.  In many cases the surgeries  have proven to cause great harm.  Especially if it happens to an infant or child, I consider corrective surgeries as genital mutilation and torture.

I believe that any well informed, and consenting adult, should have the right to modify their body, or genitals, as they feel it necessary.   However, it is my hope they are conforming due to their own personal needs , and not due to governmental, or societal expectations, or laws,  to “pass” as typical male or female.  I believe that all people, transgender or not, have the right to genital integrity.

I believe that labels can be as helpful as they can be destructive.  All of us born LGBTQIA+ sometimes have to depend on these labels to declare and explain our different human rights needs.  I feel that the intersex community is very different from the rest of the LGBT experience,  and  my actions prove that I show respect for those who are LGBT.

I believe that some people (cis gender or transgender people), can later discover in life that they have intersex natural bodily variations,  a  difference is sex development, disorder of sexual development, DSD,  any intersex variation, or hormonal variations.   I have helped many into the intersex community to get support.  However, some stories we have heard are medically impossible.   It can do much harm to those of us who are true, when a person creates a tall tale about themselves being born intersex when they are not.  These untruths can harm intersex babies born to this world, and can even create falsehoods that harm all of us intersex people as a whole.

I believe that the way people dress, cut their hair, desire to appear as, and act as, is truly more like a socialy learned gender performance for all of us.

Thank you, @lara.neira.3
#webdubois #humanrights
Please stop conflating sex traits with gender identity. It erases the existence of some #intersexpeople.
#sextraits #genderidentity #sex #gender #sexisaspectrum #genderdiversity #sexeducation
The true test is how you treat us minorities when we are not watching. #lgbtqia+
Chumley, our #africangreyparrot says hello! He believes in #selfdetermination too, by the way.

A Day to Honor and Remember those who came before us.November 8, 2021
3 months to go.