Each and every day on Earth,  intersex children are being harmed by non-consensual genital corrective surgeries.  It is important that we learn the many names of intersex, because we are being called a “birth defect”, “disorder”, “syndrome” and “condition”, when we are simply born a variety human.  To learn about the many names of intersex you can go here:  Intersex is what it is….

Doctors call us a disorder, defect, or syndrome, when we are born. We are simply INTERSEX.   It is important to make these atrocities visible.  Only in becoming visible, can we change culture and end these tragedies.  Only two countries, Malta and Chile have made it against the law to do non-consensual “corrective surgeries on intersex children.  Even though the United Nations has declared these surgeries to end.

The Facebook page Intersex Awareness Day  shared these four tragedies on Human Rights Day December 10, 2016.    I now take the liberty to compile these FOUR in one blog to make more awareness: 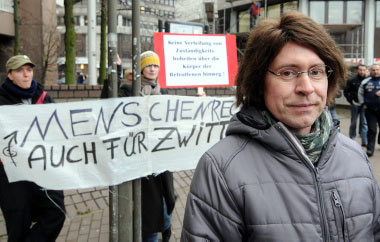 In 2009, Christiane Völling won, for the first time, a legal case taken for so called “normalising” surgery without consent. The German national won €100,000 in reparations. Report by Zwischengeschlecht.org.  You can read more about this case here: Christiane Völling: Hermaphrodite wins damage claim over removal of reproductive organs.

In 2013, interACT, the Southern Poverty Law Center and the Crawford family took action against South Carolina for medical malpractice in performing unnecessary and irreversible surgery on a 16-month old child, M.C..  The child ended up identifying as the opposite gender assigned through surgery.  The case is, as yet, unresolved. You can read more about this case here:  InterACT Law and Policy and you can listen to the parents here: Gender Reassignment Surgery: Parents Sue Doctors For Making Their Intersex Child A Girl, Claiming Genital Mutilation.

In 2014, a Kenyan court ordered the government to issue a birth certificate to a 5-year old child who needed this to enjoy basic rights including attending school. In this article John Chigiti provides an update, nearly two years later.  You can read more about this case here: The Plight of the Intersex Child.

Quote: Children have a host of rights which include the right to privacy and bodily integrity and autonomy. On the other hand the parents have rights over the children and they are supposed to make decisions for the child. Where do the two competing rights meet? How are the parents and the guardians of intersex children supposed to exercise parental responsibility? How far can they stretch so as not to violate the rights of their intersex children? The approach to the legal dynamics is very different when dealing with children of a category like the intersex.

In a shocking 2016 judgement, the Australian Family Court stated that parents were entitled to approve the sterilisation of their 5-year old child, and it was unconcerned with earlier surgery that “enhanced the appearance of her female genitalia”. Case report by Organisation Intersex International Australia.  You can read more bout this case here: The Family Court case Re: Carla (Medical procedure) [2016] FamCA 7.

I end this awareness with this important quote from 17th Karmapa:

Our ideas about what it means to be a woman or a man – that is, our gender constructs – are given meaning and importance in our day-to-day reality. Gender identities permeate so much of our experience that it is easy to forget that they are just ideas – ideas created to categorize human beings. Nevertheless, the categories of masculine and feminine are often treated as if they were eternal truths. But they are not. They have no objective reality. Because gender is a concept, it is a product of our mind – and has no absolute existence that is separate from the mind that conceives of it. Gender categories are not inherently real in and of themselves.
17th Karmapa

from the book “The Heart Is Noble: Changing the World from the Inside Out”

To learn more about the many names of intersex you can go here:

Intersex Is what it is….