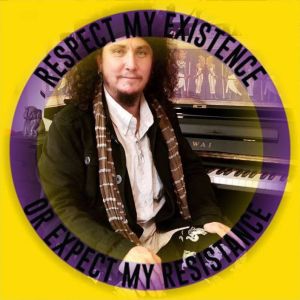 Up until this year, I typically have not celebrated June CAH Awareness month, because of the CAH (Congenital Adrenal Hyperplasia) organizations and groups not even acknowledging my sex is intersex and that I am an intersex man.  I do believe that this is all due to their prejudice and bias.  Serendipitously, CAH Awareness Month lands during June PRIDE month!  So I boldly made the connection in a meme above that I blasted out on social media.

When I came out against my birth certificate in 2014, my CAH support groups pretty much showed me the door.  All because of their transphobia and homophobia, I was suddenly rejected when I told them I was going to live as a man now, married to a man.  Worse, they were not happy that I had changed my view of my having a disorder, to now celebrating being born intersex.  To this day the CAH organization website does not even acknowledge that little kids, like me, can be accidentally assigned female in ERROR at birth.  I have since uncovered a very serious problem with prejudice as outlined below.

Here are the problems with most CAH Organizations and Support Groups:

They literally deny my gender identity as a man, and here is some reason to why I think this might be happening:

I do believe intersex phobia, transphobia, and homophobia is the driving force around all this.  These organizations do not want us to grow up appearing queer, gay, transgender, or God forbid we celebrate being born hermaphrodites, and/or calling our sex intersex!  The way I see it, these surgeons who abide by all this CAH Organization phobia are literally cutting the gay off to “normalize” our bodies and force us to live heteronormative lives!

The saddest thing about all this is that there are intersex babies that grow up after these genital corrective feminizing surgeries that are not girls that go on to live as men.   Brian Douglas of the documentary Gender Revolution by Katie Couric is like me!    He is another CAH 46XX Intersex man.  Catastrophically he was harmed with surgery when he now lives full time as a man now but decided to change his birth certificate to male.  Since that worked better for him.  I know others too that live as men now, who were physically and psychically mutilated.  This simply has to end!  Our self-determination is about our human rights!

So to celebrate CAH Awareness Month, I decided for the first time, to call a phobic skunk a skunk! These CAH Organizations and Groups have to STOP denying our existence as boys when we are born 46XX CAH intersex and simply get over their intersex phobic, homophobic, and transphobic bullshit!   Stop hurting innocent little babies!

My Accomplishments as a Gender/INTERSEX Activist and Educator

Below is an article about another intersex person with CAH: