The above picture, of this little girl, went viral.

This picture should go down in history.

As a parent of three amazing kids, this picture touches me in ways that few might realize.  Because now I know how such hate touches the heart of an innocent child.  I have seen their tears personally.  No different than the hate of the  African American Slaves, and the freed African American people before the Civil Rights Movement.  I can only imagine that Martin Luther King Jr.  cried such tears too, as a little boy.   Some will justify that there is no parallel, but of course there is.  Sexual minorities are harmed in countless ways, due to not having the same rights.

I am an intersex man, reclaiming my true gender.  When I appeared a woman to this world, although it was not my true gender, we had Privilige.  This world thought we were a heterosexual couple. We experienced no hate.

Now that I have embraced my true gender, we magically lost that privilege, but I am the same person.  We are the same couple, and the same family.  The loss of that privilege makes no sense.   We participated in our first PRIDE parade this year; and it has been my job to try to get people to realize that Intersex people do exist.  Please say:

Transgender and Intersex have nothing to do with sexual orientation, but due to these groups having few human rights, have found their way onto the list.  The Plus sign, shows that there are many, many more acronyms.

Here is a banner I made for the Pride Parade this Year, 2015.

At the end of the parade there was this huge crowd of people to celebrate the end!   I could not help but cry, behind my dark tinted sunglasses.  The energy of the crowd pure love.  What an amazing feeling!   Here we were safe to hold hands that day.  Now why can’t our world become a better place for everyone, every day?

Someday we won’t need different flags; we will only need one flag, the “Human” flag.

It is important to educate.

It is everyones responsibility to help stop this hate.

We should not have to repeat history.

This Blog Post is Dedicated to PRIDE – U2  A tribute to Martin Luther King Jr. 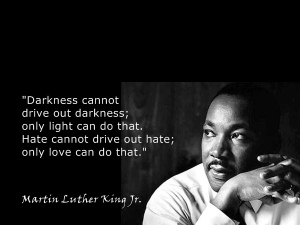 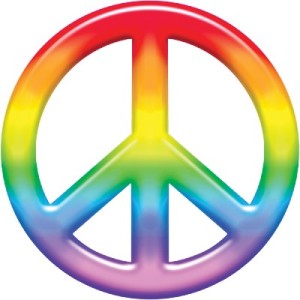 A Day to Honor and Remember those who came before us.November 8, 2021
4 months to go.