Now that I appear a guy, my husband is often asked if he is gay?   It is a difficult question since he has never been with a typical man before, nor wanted to be with one.   He was with only typical females before me.

As some already know, I was born intersex, and assigned female at birth.  My form of intersex can be described by this prader scale below.  Please note, that there are many forms of intersex that do not cause these same changes.  I show you this to give insight to our sexuality.  You can read more about my form of intersex here:  About Mx. Anunnaki Ray (With videos) and Seven Names for the SAME thing: Penis, Phallus, Clitoris, Phalloclitoris, Micropenis, Microphalus, and Clitoromegaly.

I appeared female for the first forty-six years of my life.   For the first twenty-six years with my husband, we appeared a heterosexual couple.  Although there was nothing hetero-typical about our sex life.

This September, we have been together for twenty-eight years.  We had privilege back when I appeared female, we could hold hands without thinking about the dangers, and with our three kids, we appeared a typical American family of five.  You can read about our family here: I am a SEAHORSE Dad and Where is a Safe Place .    As you can imagine, things have dramatically changed how the world perceives us together.  So, although I have blogged about this before: Are My Husband and I Gay Men Now. How we became Sexual Minorities, our Intersex Love Story.   I would like an answer to that common question again with a better answer:

“Is my husband gay?”

We have talked about using “bi-sexual”, or “pan-sexual” to describe his sexuality but that is not accurate either.  A word that came to my mind the other day, is that he is “intersexual”. But intersexual is typically not used as a word to describe sexual orientation.  I suppose as an activist, and in our unique situation, we will give new meaning to this word.

So today I answer to you, that my husband is “intersexual”, due to being sexually attracted to me, a person born intersex.

INTERSEXUAL:  A sexual orientation used to describe a person sexually attracted to a person born intersex.

The only problem I see in using intersexual as a sexual orientation is that not all people who are sexually attracted to an intersex person would consider themselves “intersexual”.   Plus, not all people born intersex have the same variations to their body that I have.  Therefore, it is up to them to decide their own sexual orientation.  So, please never assume that just because my husband is using this word to describe his sexual attraction to me, that it means others agree,or are the same.  Here are the two symbols (One of the intersex symbols, united with a typical male symbol), that represent my husband and my union as a married couple: 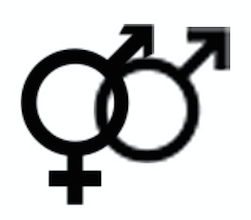 Symbol for a Lesbian Couple

Symbol for a Homosexual Couple

You can read more about other Gender Symbols and Human Sexuality  here:

These three answer more about me and my husband:

The Difference Between my Biological Sex and My Gender.

I was born with an Intersex body, but this does not create my Gender or my Sexual Orientation.

I was born perfect and I am lovable. Thank you, United Nations.

5 thoughts on “Is my husband gay, now that I appear a man? I will use “Intersexual” as a Sexual Orientation.”