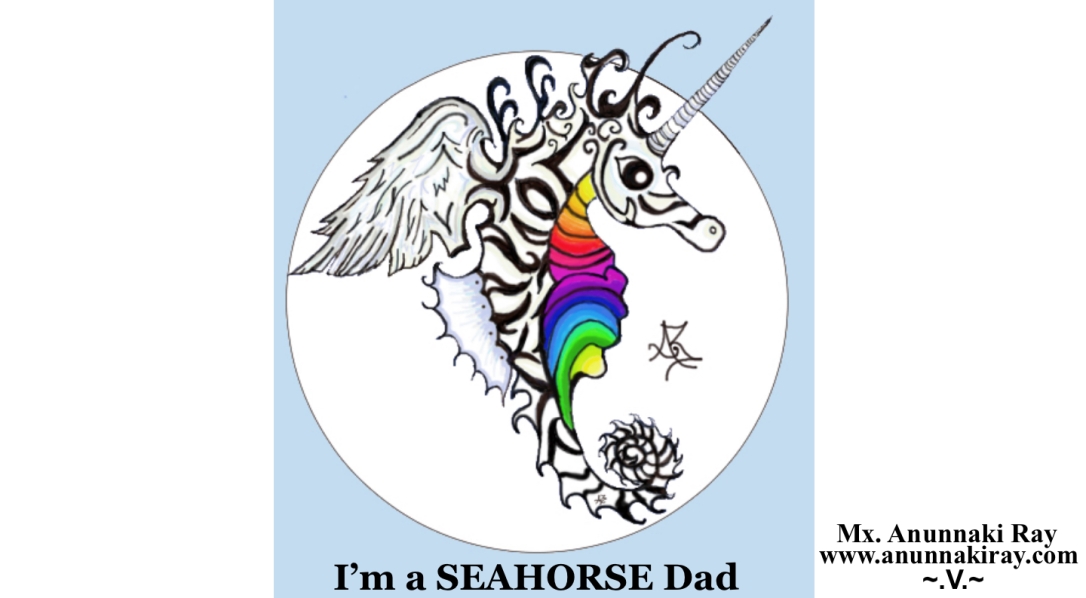 For fun, I compare myself to a seahorse dad.  For it is the seahorse dads who give birth.   Yes, I am a gestational father, a term I got from my intersex friend.  I am an intersex person, who identifies as being a man and gender nonconforming because my body is not male.  My body is intersex.  This means my biological sex (sex characteristics) is intersex, but my gender identity is man.  They do not match.  Not all intersex people are like me.  This is simply my story.  You see, my body naturally creates its own testosterone at a much higher level than a typical dyadic and cisgender female.  Hormonally and physically I have intersex traits, it would be decided I should be raised a girl.  But I was not a girl’s gender.

I was taught, when very little, that all females want to grow up, get married and have babies. I felt it my duty, my obligations. To be honest, I wanted that too. However, I NEVER felt like a mother or a wife. We now know that transgender men can have babies. There have been many now, becoming pregnant and having successful births.  Also, please read about this amazing intersex man, who successfully had a baby girl, and talks about intersex fertility.   His name is Cary Gabriel Costello, Ph.D., and you can read their story here: Intersex Fertility: Intersex Roadshow Blog.   Cary calls himself a “gestational father”.   He also created the “Gestational Father’s Club”!  I like that too! 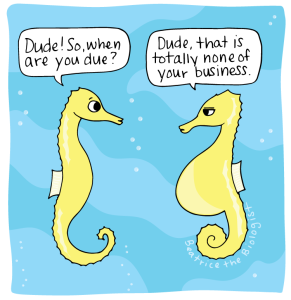 Being perceived as female, and as a mother, was terrible for me. The typical women always caught on that I was different.  It could have been because my pheromones were not that of a typical female, I do not know for sure.  I was an outcast, appearing as female, most my life.  Now that I honor my true gender hormonally, I now can simply be me.  Our three children call me “Vader” now. Which is German for Father, and I love it.  For mother’s day, we now celebrate “SEA HORSE DAY”.

If I could do it over again, and it had been my choice, I would have been a pregnant man.  I now know my Reproductive Endocrinologist would have honored it too. 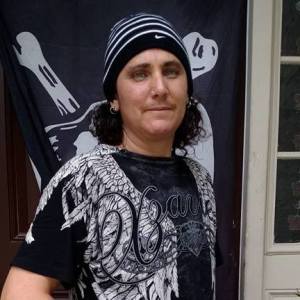 (I am only about six months into reclaiming my true gender in this picture: Taken Late Spring of 2015 )

We suffered so much pregnancy loss.  This song lifted my spirit when we battled to have a pregnancy go to term.  Elton John gave me hope, during a very grim time of my life.

I dedicate this blog post to:  Elton John – Blessed

For fun, here is a link to watch a Male Seahorse giving birth at The Deep Hull,

Learn about seahorses here too:  The secret sex life and pregnancy of a seahorse dad

These two little seahorses were a gift from a dear friend! 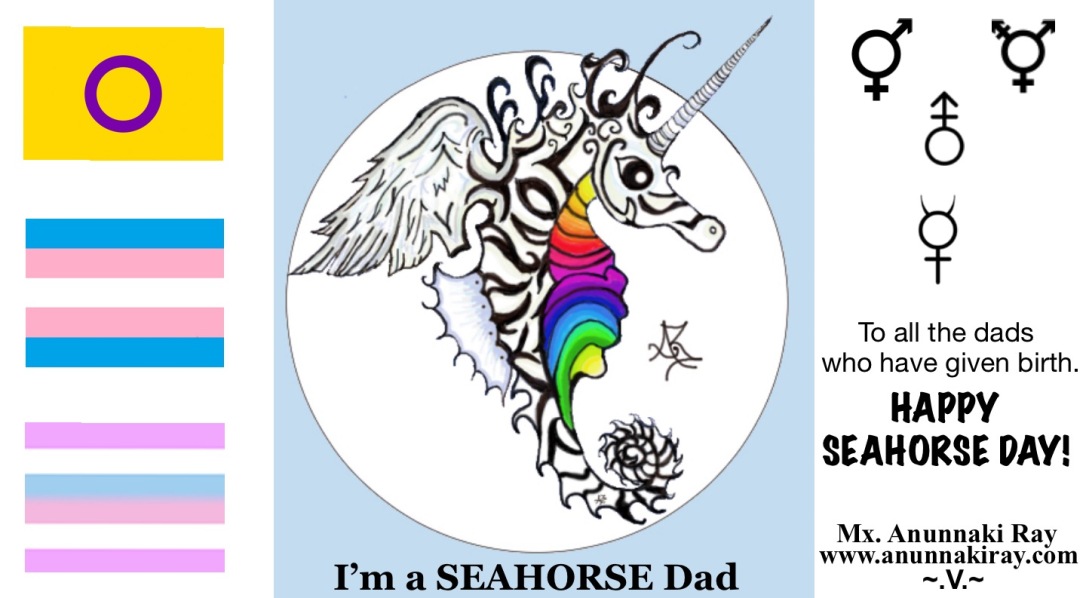 You can read about its symbolism here:

The Creation of My Seahorse, and what he means to me.

What do you do on Mother’s Day when your mom becomes your dad? HAPPY SEAHORSE DAY! A Holiday Created by My Family. Plus, the story of a beautiful transgender woman, and three special guys who gave birth.

“Womb Man” versus “Woman with a Beard”; My thoughts, my story. 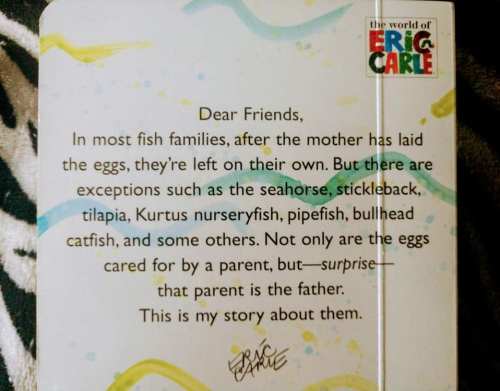 Here is a special gift I received after one of my educational talks. 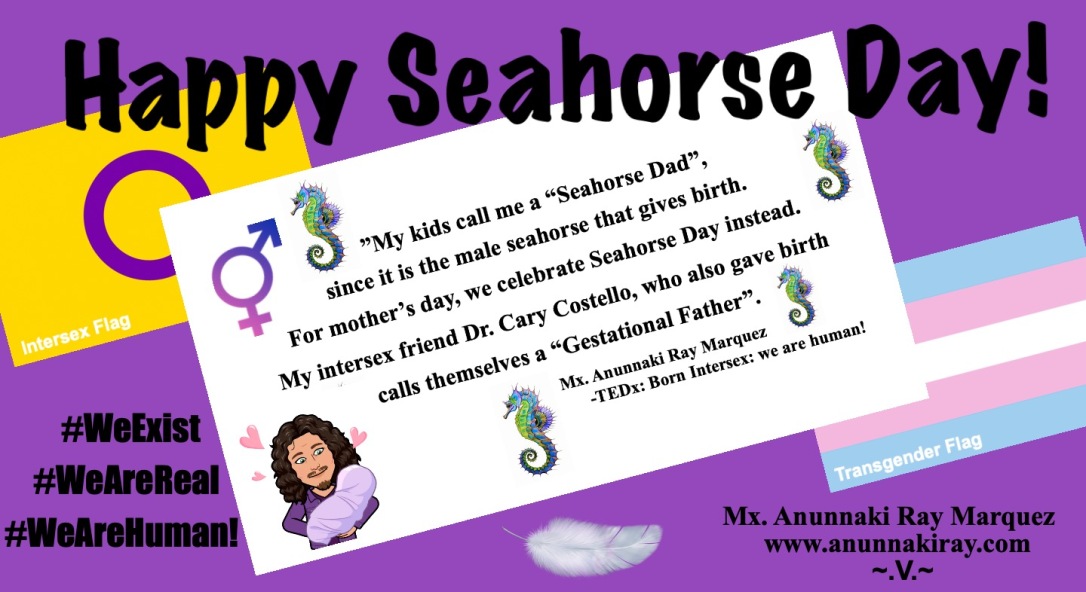 A Day to Honor and Remember those who came before us.November 8, 2022
5 months to go.